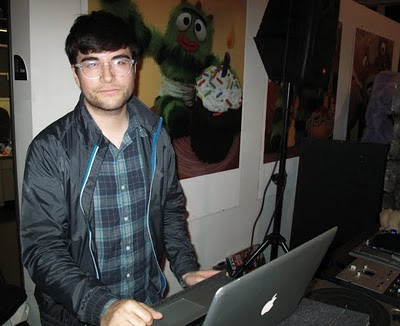 Jordan Kim moved to Los Angeles in 2005 to work as an artist and designer for Tim and Eric's show "Tom Goes to the Mayor" on Adult Swim. From 2007 to the present he's been working as a writer, director, and animator for the Nickelodeon children's show "Yo Gabba Gabba!"
In addition, he's directed both animated and live-action music videos for artists such as Daedelus, Sam Prekop, Teams vs. Star Slinger, and Toro y Moi. His work has been featured on Pitchfork, Stereogum, MuchMusic, Wired, Gorilla vs Bear, Nylon, XLR8R, among others.
www.enchanted-fern.com


Video: How I know by Toro y Moi

The music reminded me a lot of '60s and '70s European film scores by people like Morricone and old Italian horror films, plus it had a spooky quality that I thought would lend itself well to a haunted house story.

Q. Do you have any favorite Italian horror films?

I actually haven't seen that many, but I've liked all the Giallos I've seen: Deep Red, Suspiria, Black Sabbath, and The Bird With the Crystal Plumage.

I actually approached them. Toro y Moi is one of my favorite bands, and I had been trying to get in touch with Chaz for a while. Finally a mutual friend set up a meeting after one of his shows. I thought I was going to be a tough sell since he didn't know me at all, but he very casually said yes.

Pretty small, a couple thousand. I ended up adding to it myself, which some might say is a bad idea-- but I was really excited about the project and wanted to make sure it was done right.

As always, it would have been nicer to have more money... I would've loved to have had a proper rig to suspend the ghosts for their flying scenes. Our method was pretty wonky.
I also wanted the bubble gum bubble to be real and we got a bunch of balloons of various sizes, but trying to get practical balloons to change size that dramatically in one shot ended up being pretty impossible.

The DP, Chris Saul, and production designer, Todd Fjelsted. They were the ones I sent the most reference material to and they nailed the look I was going for. Todd found some amazing props to dress the set, which was a fairly normal looking house to begin with.

I hadn't worked with any of the people involved in the production, but they all came highly recommended. The post crew I had all worked with, and Julia Vickerman, who did the storyboards. She is my co-worker on Yo Gabba Gabba!

I started by making a shot list and editing it to a timeline of the music. I like to do narrative videos that use cues in the music to underscore the story, so I feel it's important to figure out a rough edit before storyboarding. This gives me an idea of the pacing and how many shots I need to plan. I discussed the shots with Julia, who quickly drew some great storyboards. 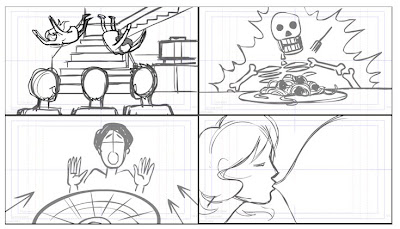 This was my first video working with a producer, and he helped a lot to get things done and make sure all interested parties were on the same page. But there are a lot of things I still had to do myself, such as figuring out the cast, location, production designer, choreographer, DP, and costume designer. Once all of that came together, I did some effects prep work-- trying to figure out how I was going to create the ghost effect. We shot two 14 hour days, blacked out the windows of the house so we could shoot during the day, and ended the second day with all the nighttime exteriors.
The post process took about a month, mostly because of all the rotoscoping involved to achieve the ghost effect. Because of the amount of roto that needed to be done, I had several friends helping me-- some of them had never done it before. I also did pretty extensive color grading.

It was about four months total, from concept to finished product.

Q. I guess with a low budget video you could take your time with this project, is this right?

Yeah. So far I've only been working on videos for artists that I'm really into, and I've been doing them while on haitus from my regular job at "Yo Gabba Gabba!" This has allowed me to have a little more time to work on these projects and do them the way I want to.

Q. If certain elements came together better such as the lighting, how much time do you think you could have saved in post?

Probably a week or so of actual work... however, I was a little sluggish in starting the post process at first because I was pretty frustrated with the look of the footage. It was my own fault. One thing I learned on this project is the importance of preparing lighting/color schemes, especially when you're doing something really stylized.

Q. Do you feel that the client understands the production process? How involved were the band and label?

Chaz told me that he hadn't been very involved in his past videos, so I really wanted to keep him in the loop. It's important to me that the band feels my videos represent them well and are consistent with their overall style. When I sent my original pitch to Chaz and the label, I included a ton of reference material-- and they were into everything I showed them. I also felt that because of Chaz's strong aesthetic sensibility (he designs all his packaging and has a degree in design) it would be extra important to make sure the visuals were compatible with what he had been putting out.

Q. Did you cast this yourself, or were the actors presented to you?

I cast the video myself, but Daniel Franzese was presented to me as a friend of Natalie Toren, the costume designer. The rest of the cast were either my friends or friends of friends. Instead of going through normal actor channels I decided to cast based on look, because I was trying to go for a specific time period. For instance, though he had no previous acting experience, I cast Ashkahn because his hair looked really cool and '70s to me.

I think I would have taken much more time to get the right lighting before shooting, so that I wouldn't have had to fix so much of it in post. I got so caught up in concentrating on the actors that I kind of lost sight of the color palette, which is normally something I spend a lot of time on.

Q. Do you believe in ghosts?

I've personally never seen a ghost before, but that doesn't mean they don't exist. I've never seen the pope either, but I'm pretty sure he's real.