I got the brief from Columbia Records through my production company Agile Films. I'd worked with Columbia before on a video for Yellow Days.

The technique was inspired by a British sculptor and filmmaker called Tony Hill. Since the 70s he’s been making a series of films based on unique camera rigs that he builds and operates himself. He more or less invented a lot of what you see in music videos these days 30 years ago. In the early 2000s he made an advert for a hilariously kitsch hatchback with sliding doors that employed the orbital movement you see in the video for ‘Nobody Else’, and I shamelessly ripped it off. I actually went to visit Tony in Cornwall to try and borrow the rig itself but it was sadly dismantled, though he did very kindly talk me through a lot of his projects which ended up being one of the best afternoons I've ever spent as a filmmaker.

Content-wise the video was very loosely inspired by a 1960s hippy commune in Mexico called San Miguel De Allende. There’s a lot of amazing photography that’s emerged from it recently that I’ve become quite obsessed with - this slacker utopia with an amazing aesthetic.

Oh god. Well when Tony broke the bad news that his rig didn’t exist anymore I found myself in a bit of a pickle - I’d basically pitched on the vain assumption that we could borrow it. We had to very quickly find a different way to get the camera to orbit around a central point without track, which is surprisingly hard. The solution ended up being a motion control crane which was not ideal - the general rule with motion control seems to be that something will always go wrong which will lose you half a day. And of course that happened on this one. So it ended up being a crazy rushed, one take per setup sort of deal.

The producer Javi Alejandro is an absolute wizard. He’d just done the Henry Scholfield videos for Stormzy and Wiley and his game was genuinely next level, he never says no to anything. So even though the budget wasn’t massive it never felt like that was very limiting.

So I suppose the biggest limitation was time, really. I’d originally pitched shooting the whole thing in multiple locations, which would have been nice but didn’t end up being practical with all the hours of rigging and de-rigging it would have required. We ended up finding a corn field with a meadow directly behind it so all we needed to do to change location was flip the crane 180 degrees. The other big thing was that on the day it emerged that the motion control arm could only move at about 50% of the speed we’d been promised, which was a bit of a blow. I’d made a pre-viz in Blender which assumed a specific speed of motion so it that was a spanner in the works that I had to ad-lib around. 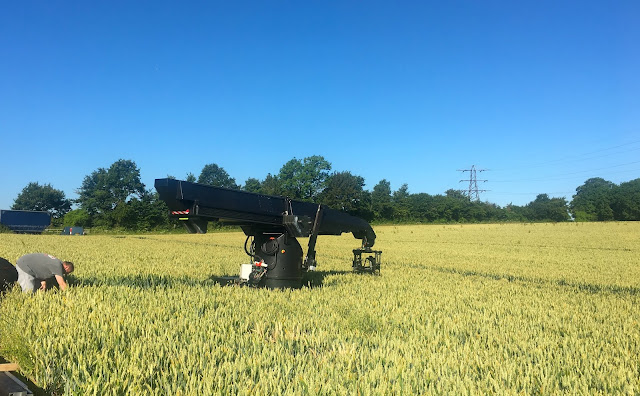 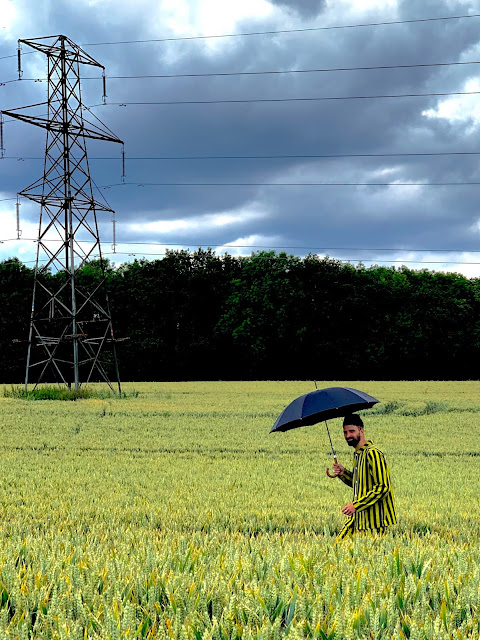 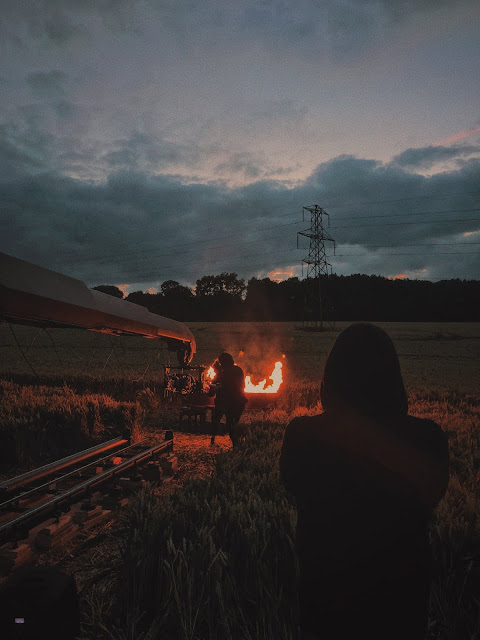 Where was the location?

The location was on a big farm just outside London in a place called Sevenoaks. There were about 50 different fields we had to choose from and this one got the nod because of the big pylon slap bang in the middle. I seriously love a good pylon. 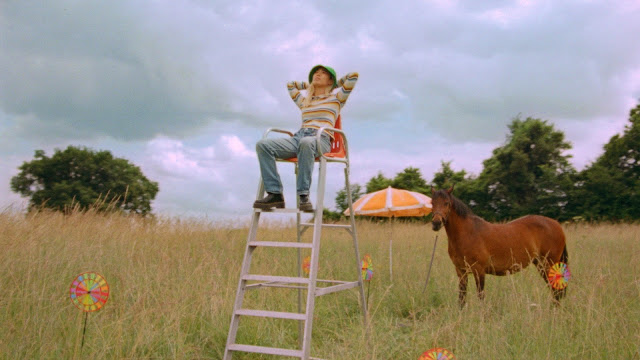 What’s with the stripy pyjamas on Serge?

I’m a huge fan of the Dutch artist Teun Hocks and in his self-portraits he is often wearing pyjamas. There are the obvious associations with dreaming, but I also think that when you see a grown man wearing them they add a layer of vulnerability, because I associate them with childhood. The lyrics also begin with Serge saying “I don’t want to go to work today” which is a feeling I very much link to lying in bed, so there’s that too. 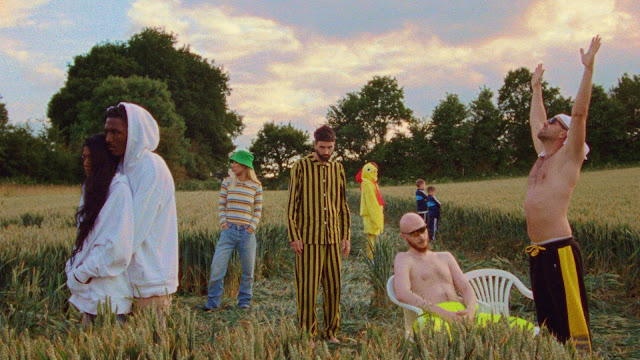 Tell us about the cast and style, were they influenced by the commune folk in San Miguel De Allende?

That’s where the idea for the two brothers in the video came from. And the chicken you see at the end is a direct copy of an Alessandro Bo photograph from San Miguel de Allende (Link)

As in we literally had a costume custom-made to match that photo because the chicken costumes you can get nowadays don’t look nearly as good. If you get the chance I would definitely recommend buying Alessandro's book. It is a work of art - the cover is printed on iridescent paper so it’s always the first thing people pull out of your bookcase.

Beyond that really it’s more of a mood. What do people with free spirits in the middle of nowhere do with their time if they don’t have to work? It’s almost like becoming a kid again.

It was about 1 month from treatment to delivery. I did most of the post myself in a 48-hour binge, and luckily Agile have an in-house VFX team so my boy Eamonn did the hard stuff, haha.

Ciaran Linden Beale on production design, Luci Ellis on styling. Javi the super producer. And Spike Morris behind the camera.

Just Spike, who I’ve worked with loads. He is a very soothing presence who has great ideas and a lot of patience for all my nonsense.

What did you shoot on and what lenses did you use?

We shot on an Arri 416 with Cooke S4s. Spike wanted to shoot on Etkachrome which Kodak have just re-released but the turnaround at the moment is something like 2 weeks which doesn’t really work for music videos given the tight schedules. So it ended up being good old-fashioned Vision 3 which we pushed a stop.

How involved were the band/label?

Serge was very involved, he really knows what he wants and has a rare eye for detail and nuance. He was picking out extremely specific things in references I sent over that made a certain image work or not work for him.

It’s a difficult one because a lot of the finessing I wanted to do got lost in the mad rush following the motion control hiccups. Generally speaking I wouldn't shoot motion control without a pre-light specifically because you need that extra time to calibrate everything and make sure it’s working. But our hands were tied by the fact we only had the budget for a single day with the motion control guys.

Assuming the motion control worked without issue I would have liked to have spent more time on the transitions. There are one or two in there I really love, where the parallax is really obvious, but I think too many of them end up feeling a little flat. I also ended up having to make the call to keep the foreground transition elements static because we were so up against it on the day that there wasn't time to rehearse the blocking properly. I think it would have been really cool if they were moving.

What’s next for you?

All of my best friends have decided to get married at the same time and this weekend I am finally approaching the last wedding of the year. So after that I will thankfully be able to get back to work writing my first feature and shooting a ton more music videos. 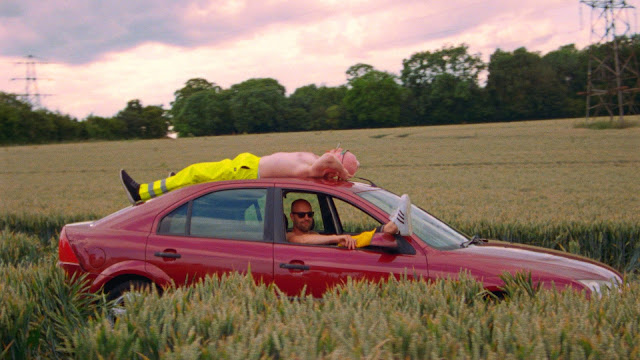 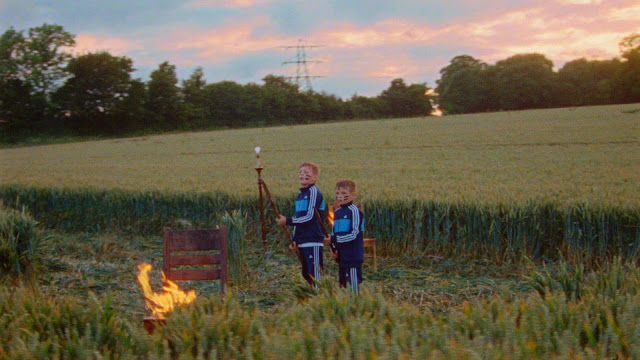 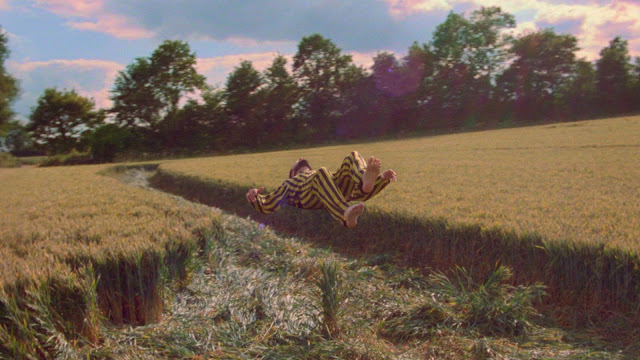