David Wilson is a London-based artist and music video director.
Coming from an illustration background, David first started getting recognition for his work with his masterful music video for Moray McLaren’s “We Got Time” in which he was able to achieve live in-camera animation combined with live action via the renaissance of an old animation devise called a Praxiniscope.
Since then he’s developed his music video directorial skills in ever-shifting ways; creating eerie face-paint animations for We Have Band, a biblical epic of a music video for Dupstep pioneer Skream, and most recently an ultra-glamorous take on the Devonshire town of Torquay for Metronomy.
In 2009 he picked up the much coveted title of “Best New Director” at the UK Music Video Awards.
Along with directing, David also regularly VJs with his home-made visuals at clubs and music festivals.


Video: The Bay by Metronomy

Q. What inspired you on your idea for the video? Its seems like a little departure from your other music videos

It's been a concept that I've been working on for a while now. I guess it seems like a departure when you're flicking through my reel, but over the past 12 months I've been writing live action scripts and doing tests/personal work along the same lines as the Metronomy promo, This has just been the first time I've been able to take that leap and realise it in a polished end result.
I always seem to find each project is pretty different to the last. In the last 12 months I've gone from pure hand drawn animation, to two films using puppets, and then this!

Q. You mentioned that it was something that you had been developing for awhile.
What was the original concept?

Oh, that's just more that I'd written scripts with that kind of glamorous lady featuring in.
This was the first video I won that I was able to put them in

Q. The video has quite a minimal fashion shoot orientated feel to it. Were you influenced by fashion photography at all?

Of course! There are some definite nods to Guy Bourdin in there.

Tamsin Glasson (my rep. and Colonel Blimp) had a meeting with Jane Third, the commissioner from Because (the label Metronomy belongs to). Jane seemed to like my work, so she sent Tamsin the track asking if I could put my ideas down, and we went from there.

It kind of grew a bit, but I'm pretty sure it ended up being something around £22,000

The biggest obstacle was the weather! We shot it in Torquay in England. It was integral to the film as the town is one of the three that make up the 'English Riviera', the part of the Devon coast that Metronomy's album is named after.
We were extremely lucky, but actually lost quite a bit of time, and quite a few shots, waiting for clouds.
The producer, Patrick Craig, worked in tandem with the English Riviera Tourism Company to make everything happen. It was so special; the Tourism Company managed to provide accommodation, locations and food for free.
That's not say it was easy going though. Patrick was worn into the ground trying to make everything happen for me.
It's a massive credit to him that any limitations I faced during production were overcome with such ease.

I hadn't worked with any of them before, but I had worked with Cynthia on the development of a project before.
It was for a project that never saw the light of day, but had a similar tone to this Metronomy promo. She's fantastic, so it was great to get her on a job that we were able to push into reality.

My pitch was actually reasonably stripped down. I wanted to describe the look and mood of the piece rather than the actual content. So after I won the job, I went down to Torquay on two different occasions before the shoot in order to shape the structure of the piece from my experience there, and seeing the location.
So it was pretty organic, and it felt good to be shaping a piece from feeding off an environment and research rather than it all coming from a fictional place in my head.

About a month. It was going to be a very quick turn around due to the band's availability, but we managed to fly them in to the UK half way through their European tour in order to make it all happen and get the best out of Torquay.

Q. Do you feel that the client understands the production process? How involved were the band and label?

Yes. Metronomy are on their 3rd album now and are seasoned artists in doing music promos. The client and band were also very trusting on the process. Joe (Mount, the frontman of Metronomy) had quite a bit of input via email, and Jane (Third, Commissioner) came with us on the first recce to Torquay, so it was great to have the access to both the commissioner and band, I think that's quite rare, but I was very keen to keep them as informed as possible.
It'd been Joe's dream for quite a long time to make a promo like this in Torquay. So I wanted to make sure he was happy with the direction it was going throughout the whole process.

We shot on 35mm!! It was VERY exciting. We had a very Zeiss prime lenses, but the big daddy was the 45-250mm Fuji Alura T2.6 zoom lens.
It was my first time shooting a promo with a zoom lens, and it kicked ass! haha

Q. What drove you to choose shooting on 35mm? Was it the budget or purely executing your concept in the best way?

The budget is definitely not the kind you'd be able to usually get 35mm on! I was awarded a prize a few years back that gave me the opportunity to shoot on film for a chosen project.
I chose to use that prize on this film.

Q. Did you cast this yourself?

Oh man! The casting was a nightmare. Yes, I did cast it myself, but we lost half our girls 2 days before the shoot.
I had called various casting sessions, made my decision, we emailed to confirm and then three of the girls went missing! It turned out that a big fashion show had pulled into town and snapped them up! It was awful!
Thankfully we managed to get Siobhan back for one of our two days (the girl on the diving board, licking the ice lolly, and doing the leg-split), and we kept Gabriella for the full two days (the girl who licks the floor!). Gemma was a massive blessing in disguise! She was our black model, and she rocked it! And then Anna (the girl that replaced Siobhan for the second day) had to be cast from me seeing a thumbnail picture of her on my iPhone when I was on the train to the location!!!!
It turned out great, but getting Anna to lie in bushes in the middle of Torquay's Abbey Gardens and kick her legs in the air when she arrived on the project completely cold, not knowing anything, was pretty comical.

Q. Was the opening shot stock footage or did you guys shoot that?

We shot that, and all the helicopter footage. There's no stock footage in the whole promo

Q. So the helicopter filming: was it all smooth sailing? Were you limited to a certain amount of flight time and film for these shots? Did you get up in the helicopter yourself?

Helicopter was not smooth sailing at all!!
The owner of the Grand Hotel in Torquay was going to help us out by filming some stuff from his chopper, but then he crashed 2 days before the shoot! Thankfully he was fine, but the helicopter was a right-off.
Thankfully 'Hovercam' the helicopter company came to the rescue. We had to get some more money out of the record company, and the English Riviera Tourism Company said they'd contribute some money as well, and we managed to get our shots!
As part of the deal the pilot didn't take any passengers, but I laid out the exact route on the map and the camera angles and timings I required, so although I wasn't there he managed to get the shots by the book, but then went out and free-styled some shots (like the swoop over the island at 3:10) which was incredible!!

Q. Its sounds like the English Riviera Tourism Company helped out a great deal. Were there any deals done where they could use any location footage you produced for their own promotional usage?

The Tourism company paid for half of the helicopter stuff, so we went halves on the footage. The deal is that they could use any of the helicopter footage for whatever they desire. The helicopter was in the air for a while and went on to shoot the rest of the English Riviera coast later that day.

Of course, I think that's only natural. Mainly because I wouldn't want to repeat myself. If I was given the chance to approach the project again I'd want to do something as far away from this video as possible. 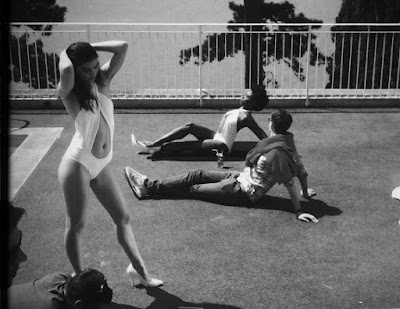