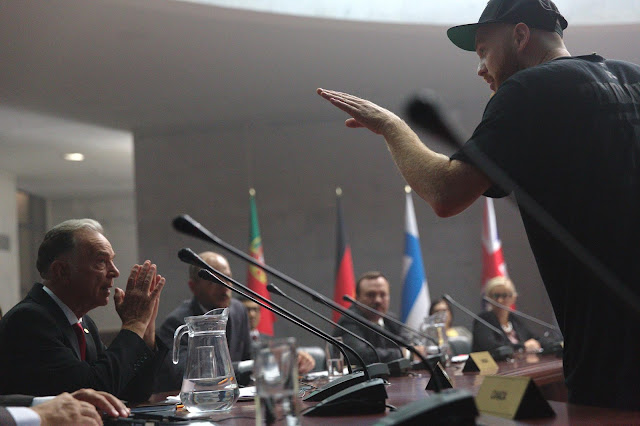 The track came direct from Mass Appeal Records, who contacted Pulse, and then Pulse sent it on to me. I was actually in Canada at the time, right in the middle of another project, location scouting in the wilds of the Yukon.

I had no time to think properly but immediately loved the track. Whilst we were scouting I listened to it on repeat and jotted down my initial ideas. One of which was this.

I quickly put it into a one-page treatment and we sent it over to the guys at Mass Appeal.

If I’m honest, despite Run The Jewel’s outwardly political standpoint, I thought they probably wouldn’t go for the concept but we quickly heard that Shadow and RTJ’s camps both loved the idea. Next was the tricky bit in working out how we were going to make it happen and do justice to the banging track.

When I listened to the track I couldn’t help but think how awesomely ridiculous Mike and El’s lyrics were and how the track almost subverted the typical ‘rap battle’ as each rapper tried to verbally out do the other with more and more disgusting and preposterous insults.

I got thinking about real-life scenarios where people battle verbally and probably due to the “Trump fucks his youngest” line, I thought “wouldn’t it be hilarious to have two political leaders facing off in a heated debate using these awesome lyrics?!”

The concept grew and built from there. However, despite the ridiculousness of the situation, I was adamant that the performances should be played completely straight, the humour coming from the set-up, rather than a hammy, over the top approach and style. 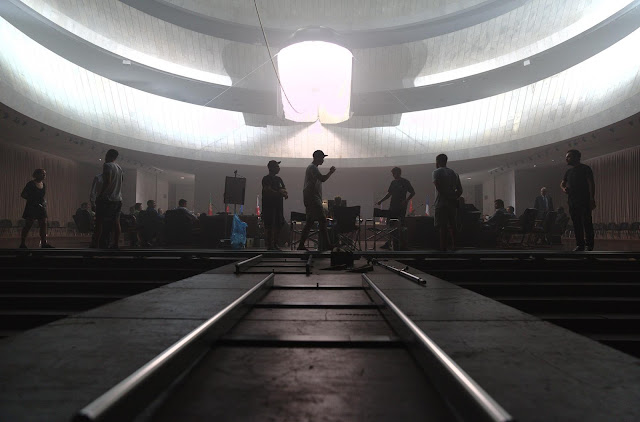 We shot the video in the Ukraine and the Radioaktive guys absolutely smashed it.

Because the whole idea takes place in one place, getting the location right was absolutely key, and it became a bit of an obsession of mine! We ended up scouting a lot of places but once I stepped foot in Ukraine House, I knew we had found the perfect space.

The next part of the puzzle was dressing it. We actually found the tables and chairs in a different location that we had scouted previously. It was amazing that they let us use them!

I’d worked with Sergey Vinnichuk, the Art Director before and it was awesome to have him on board again. His attention to detail was absolutely spot on and the set looked amazing once he’d finished with it!

We had 1 rehearsal day before the shoot. In the morning I worked with our two leads Igor and Ian, going through the lyrics, the key beats and the different emotions I was looking for at specific points.

Then in the afternoon Illia, the stunt coordinator and I, rehearsed the key moments of the fight. This time was invaluable and meant that shooting the action on the day went relatively smoothly.

It was a real passion project and I’m incredibly grateful for everyone who gave up their time and talents, both in pre and post-production to help make the video happen. Thank you!

How did you go about the casting?

In order to make sure we had great performances but also great action sequences, we cast a combination of actors, stunts and extras.

We held several casting sessions where we asked all the actors and stunt men and women to lip-sync small sections of the songs lyrics, giving us a range of different emotions and facial expressions.

Finding 50+ year old men who could act, speak English and basically rap, was obviously a tricky task. (especially In Kyiv) Eventually we found Igor who had an amazing look, gave great performances and spoke really good English, because he’d studied acting at a college in America when he was younger.

However, I felt that we hadn’t seen anyone in Kyiv who could lip-sync the lyrics quite well enough to play Igor’s leading counterpart, so right at the last minute we asked Kharmel to do a quick casting session back in England. It was obviously difficult choosing a lead actor merely off the strength of his casting video but Ian gave a blinding performance and really nailed the lyrics, despite the super short notice.

Of our 15 leading roles, 7 were actors and 8 were stunts. This felt like the right balance and Illia Lurchyshyn our stunt coordinator brought a lot of his regular stunt crew to the casting sessions. From this group of people we then chose the stunt guys who had the best ‘political’ look and gave the most natural performances. Illia’s crew is pretty tight – in fact his mum is actually the blonde politician! 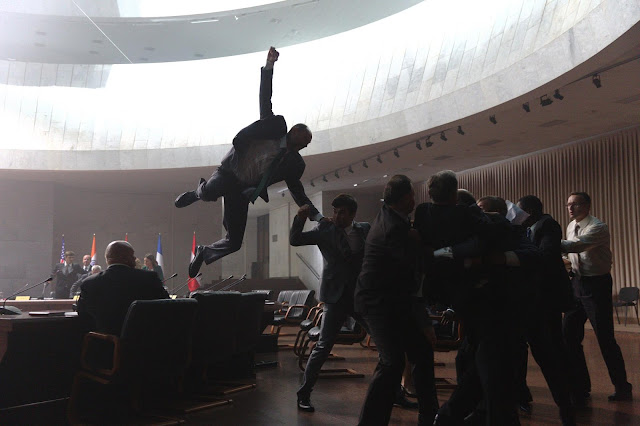 The reality is that this idea should have been filmed over two days, but in music video land you are rarely afforded that luxury, so the main limitation we faced was time. Therefore we spent a lot of time working out exactly which shots were (and weren’t needed) to tell the story, and several versions of the shot list and schedule were written up. We still ended up going overtime and had to drop some shots on the day but the main decision that had to be made was more takes, or more shots, so we ended up shooting less and less takes as the day went on!

The production had a fairly tight turnaround but nothing out of the ordinary. We scouted locations, casted and prepped for a week. Then flew straight back to London to edit, sending the label the cut after a week. Including post the whole process was a little more than 3 weeks.

Arlene McGann, who usually produces my commercial work was instrumental in making the video happen so smoothly. She was the only member of the crew who I’ve worked with before but we’d both worked with Radioaktive on a commercial last year so felt in very safe hands out in Kiev.

I had a few visual, lighting and colour palette references that ranged from House of Cards, the film work of Roy Andersson, a short film by Denis Villeneuve, Renaissance paintings and the film 300. David Procter (the DP) and I, worked closely together to establish a mature, cinematic aesthetic that had a level of opulence befitting the political situation we were showing.

I think the most complex part of the puzzle was David working out how to light and shape the large space in a way that could be quickly moved and altered depending on whether we were filming wide shots or close-ups.

I also worked closely with our stunt coordinator Illia Lurchyshyn, and we had a rehearsal day where we went through the specific actions and blocking I wanted to achieve. Illia and his stunt team really smashed it out of the park and made that part of the process much easier than it could have been!

I was concerned that we wouldn’t get all the close-ups of the specific stunts, which would mean there wouldn’t be enough visual development in the fighting sequence to keep it engaging throughout. In fact this was my main concern and something Illia and I worked very hard on. Ensuring that each little moment had enough of an arc in it’s own right, rather than just one impact moment.

We shot on the Alexa mini because we wanted to film certain sections at 200fps. The lenses were Zeiss super speeds. 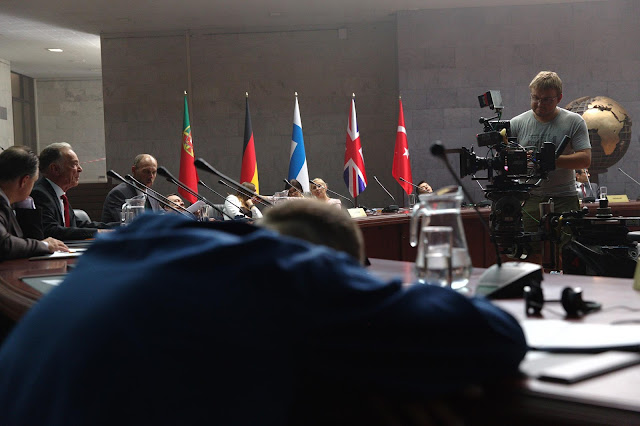 Shadow, RTJ and everyone at Mass Appeal loved the concept but my treatment was just a one-pager so I made a mood film to give everyone a better idea of what would actually happen.

After that I met up with Shadow, Mike and El out in New York and talked them through the idea. They had a few suggestions and comments but they didn’t want to dictate anything specific so they just let us get on with it. Once we were in the edit process they had a few comments that we batted back and forth but everyone loved the video and essentially the first cut got signed off. 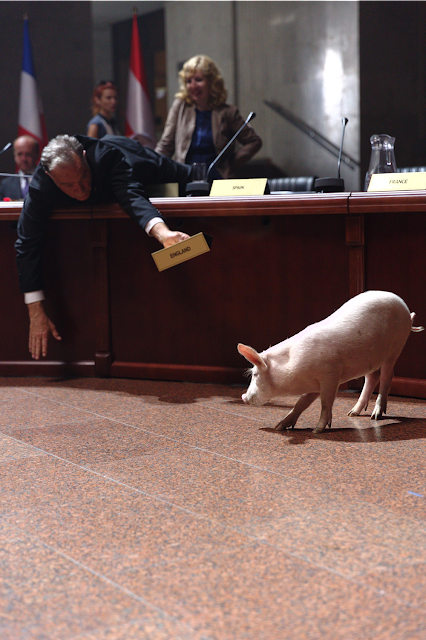 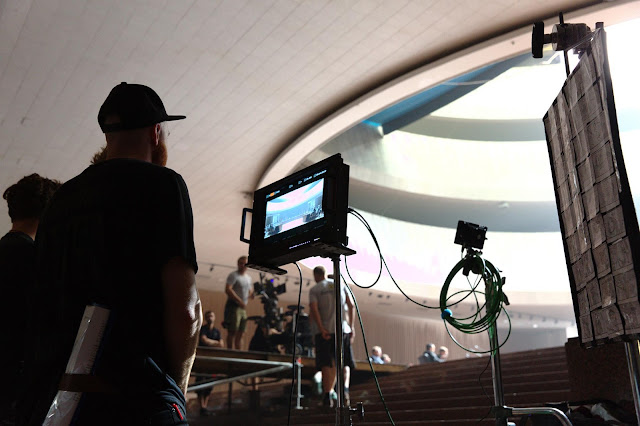