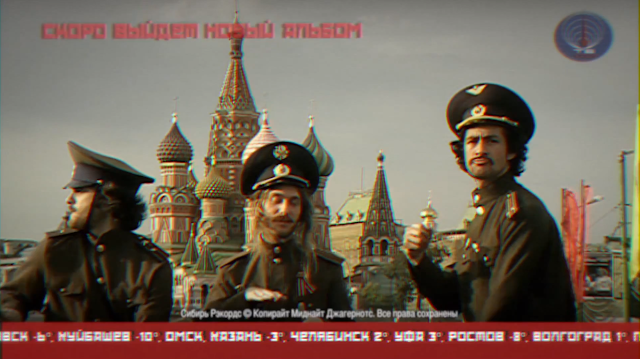 Video: Ballad of the War Machine

Vincenzi was born in 958 and was a Grand Prince of Kiev.
He consolidated the Kievan realm from modern-day Ukraine to the Baltic Sea and solidified the frontiers against incursions of Bulgarian, Baltic, and Eastern nomads.
He's also involved in various experimental film/video/music art projects and sometimes dances around in Midnight Juggernauts.
Some of this bio may be jumbled with that of Vladimir the Great.

What inspired you're idea for the video?

Midnight Juggernauts had taken time out for a little while, juggling other projects and the like. We wanted to have a strange return through something absurd, and have fun with it. We planned to create a secret video anonymously, disguised as an unknown act from the '70s or '80s. Having an interest in Eastern Bloc and Soviet histories we thought it could be intriguing to pose as a Soviet Pop band from 30 years past. It would seem like the discovery of a long lost act, long hidden behind the Iron Curtain.
The video would have no association with Midnight Juggernauts, so we wanted to see how long this Soviet pretence could remain before people realised it was us. This pretend band was posted widely and it was interesting to watch its response.


What was the budget?

Around $4000. Although most of that was used in Russia. We relied on friends doing us favours. Also the video was only possible as we were offered to play a show in Moscow, which paid for us to fly to Russia.
We should say thanks to the good people at Strelka Institute for Media, Architecture and Design in Moscow. We also had to buy some soldiers uniforms, which we still wear sometimes if the mood is right. Also money went into using a hell of a lot of props.


Tell us about the production process?

Much of the Production involved us dancing around the streets of Moscow dressed as Soldiers. We basically roamed the city for a few days and upon seeing interesting sites we'd sit the camera on a tripod and dance in front of it.
It was strange at first but there were quite a few military men on the streets so perhaps we blended in. Maybe people thought we were some army band.
Afterwards there was more dancing in front of shipping containers at a theatre company warehouse.
Rather than paying to hire individual props, we negotiated to pay for 2 days where we could use every prop available.

Lack of budget was a major limitation but we did what we could. Plus a lot of friends helped out because they were nice people. In Russia we were able to film scenes amongst military aircraft after our Russian friend slipped the security guy some dollars. That day was a lot of fun. Felt like we were kids in a playground, jumping in and out of Mig Jet fighters and military choppers.


What was the turnaround?

It was pretty relaxed. We shot the first scenes in Russia then finished it off in Melbourne. There were around 5 days of shooting and then an assembly edit over a weekend. Then we finished some other post-production on and off whenever people were available. Pretty much working on favours.
Then once it was finished we had a few weeks to circulate different versions of it across the net. Some Russian friends helped us post them across various Russian websites, message boards and blogs. Once it gained traction, we then pushed it further afield where it gained its own life. There’s still multiple versions of it floating about online which aren't attributed to Midnight Juggernauts. I love that it continues living this other secret life across the Internet.

Quite a few friends helped us. Talented champion type people like Alex Cardy, Anita Spooner, Zephyr Marama, and Leonid Gorenshteyn whom we met in Russia and followed us with a camera. Plus Marina from Moscow who kept us out of trouble. Plus we got some advice from a friend, Romain Gavras on shooting in Russia. We really didn't know what to expect there.
Plus on the tail end in Melbourne Chris Tomkins worked some Post Production sorcery, such as removing modern buildings from the background and replacing them with sky! Plus Ellen, Lexi, Daisy and others I'm sure.


Have you worked with any of them before?

Mostly no, we were just friends. Most people were involved through favours so I'm likely to be helping out on their next productions cooking food for their crew. I can make good egg-nog for wrap parties.


What did you shoot on?

It was all pretty ghetto. We did a lot on a cheap handycam. Then did more pick-ups on a 5D. I did an assembly edit on Final Cut then Chris played with it in Davinci. Lastly it was exported out onto a VHS tape deck and then imported back into the digital realm.
There’s now also 2 ratio versions of the clip. One is an old-school degraded 4:3 Soviet broadcast version which begins within a Russian TV program, and the other is a more broadcast friendly 16:9 version without the intro or VHS degradation.

I probably wouldn't have posted the video onto those body building forums. Those guys give really rude criticism. Also I wish we had more time to shoot more scenes in Moscow. Russia is such an interesting and inspiring place, and we met a lot of artists there doing great things. We'd love to return and do a normal video there someday. 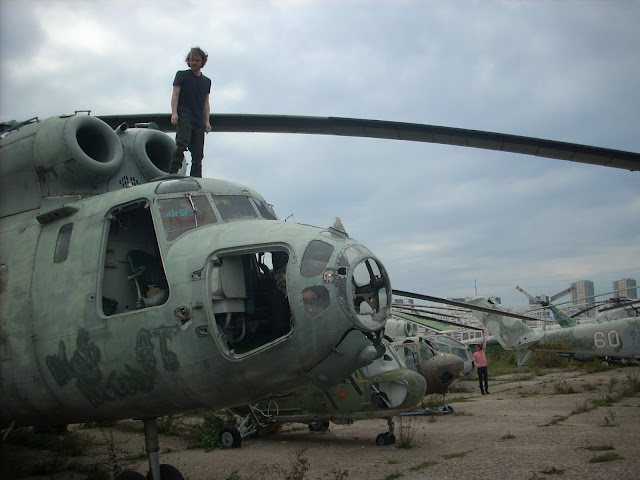 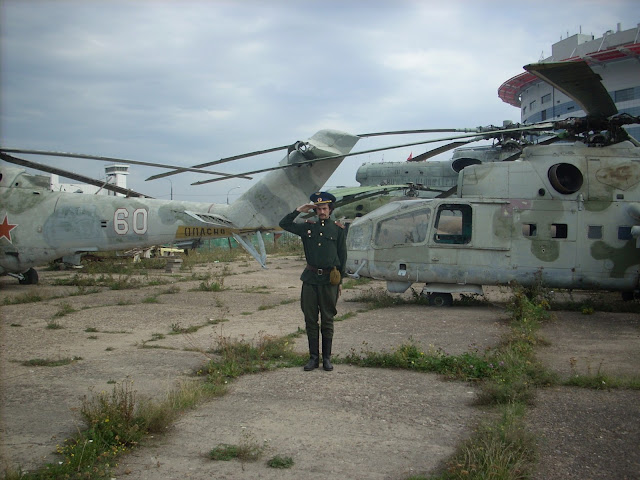