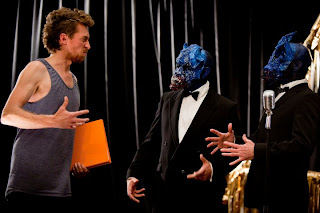 I worked as a designer and art director making websites for about 8 years. I was great fun, but I really wanted to get outside more. So I started making documentaries with the newly released Canon 5Dmk11. I loved it. I couldn't stop. Without a clear intention, I became a director and now make documentary, TVC, corporate and music video work with my friends at Camera Club.
www.cameraclub.tv

It was initially inspired initially by the lyric "Higher", which can be heard as a kind of comical karate chop "Hai Ya". Which meant there had to be a fight scene. The big intro chorus also meant the clip had to start off huge. I'd been watching some great slow motion sky-dive footage at the time too, and that, combined with karate chops lead to the Bond-esque opening we ended up with.
Admittedly we were stuck for a little while with where to take it after such an over the top opening. Usually you want the clip to build to something huge. But I consoled myself with the knowledge that, in the manner of Bond films, it can be ok for the opening to be one of the most dramatic sections. On closer listen to the track, the idea of mind control and "higher" in an intoxicated sense came into play, which lead to the aliens and the mind controlling crystal and the evil blue pills.
Overall, the inspiration kind of slaps you in the face. John Carpenter's classic "They Live", 70's and 80's Bond, Ghostbusters and any number of girl group videos with dance routines. There wasn't much time in pre production to distil those obvious influences.

I just got a call out of the blue one day. The band had seen my clip for Barbarion and liked the over the top-ness and the story elements. We ended up sharing very similar ideas about music videos needing to hold your attention, when it's so easy to scrub through the clip or click away to something else these days.

I'm not sure I'm allowed to say. Though it was more than you'd expect from an independent Australian act. Of course, no matter the budget, you never have the money to pay anyone properly (except gaffers and catering, they've got it figured out). We were trying to achieve a lot in a very limited time frame. I think we chose quantity of silliness over quality of production. I stand by that decision.

Time. Always time. Logistics too. Dealing with 70 odd dancers plus extras on set was a huge challenge. Especially as we didn't really have a 1st AD and I was doing all the yelling myself.

My DOP was Shelley Farthing-Dawe, a great young DOP who I've worked with on a lot of corporate jobs. It meant I knew, and liked, how he composed shots. He's a great operator too, which was super helpful as the majority of the clip is a single take.
Styling was done by the always fabulous and enthusiastic Holly Preston. Limitless energy and gets what I'm talking about when I don't know the proper clothing terms. I have to say thanks to my mum for making the sky-dive jump suits on very short notice.
The huge makeup team was lead by Georgia Hardy. She managed to wrangle about 30 hair and makeup artists from her course at Victoria University. It was invaluable to have such a big team as everyone had to look black tie.
I wouldn't have gotten anywhere without my Producer, Dominic Allen, and Production Manager Jasmine Funnell. So many calls and emails and walkie talkie times on set.
Kylie McKenna, the dance choreographer was also genius. She only had a couple of days to come up with that routine and rehearse the dancers and then on set she kept them all in line and motivated.
As always Activemotion helped me out in post production. Very experienced and talented guys and girls. Plus very efficient.

Q. Did you go skydiving yourself? Or did someone else shoot this?

I wish. The skydiving was done by some super qualified skydivers. 3 acting as stunt doubles and 2 as camera operators. They'd shot a lot with GoPro's and other smaller cameras, but never with something as large and heaving as a 5D with a 16-35mm lense. I storyboarded the sequences for them and gave instructions on holding frames and trying to keep level horizons, as most things they'd shot to that point had just been following a "customer" the whole time.
The most challenging thing was getting the stunt doubles to hold the poses. As soon as you become asymmetrical in free-fall you start to spin. As we'd already shot the band inserts, we had to keep going till it matched. All up it took about 5 jumps to get the couple of shots we needed.

We shot on a couple of RED Ones for the main interior ball room a scene and single RED for the exteriors. Due to the limited time we had with the dance troupe (about 5 hours) I knew we'd need 2 cameras to get the coverage. We used a single set of RED Primes for all the RED stuff. Though we were missing a 50mm as it was off getting repaired.
I used Canon 5D MkIIs strapped to helmets for the skydive footage as GoPros didn't cope with the low light of sunset too well.

Q. Had you worked with your crew previously?

Most of the crew I'd worked with before, either on the Barbarion clip or on corporate gigs. It would have been impossible had I not known there skills and trusted their work as the shoot had to move so fast. It's great fun to work with new people, but sometimes you need the team that gets your references.

Turnaround was approx 3 weeks from being asked to pitch to delivery. This is partly why the story is so referential. I'm still waking up at night with better plot elements. Ahh well.
The real challenge was pre production. We had a week. Choreographing the dance, rehearsing the dance, rehearsing the fights, etc etc. Building the props and costumes. A practical crystal was meant to feature more heavily in the clip, but I only got to see the finished version on the day of the shoot. It was so big and heavy and fragile and dangerous. And sharp. So we couldn't hang it above the crowd as we would have liked.
The main interior ballroom shoot was over 2 nights. From about 7pm till we were kicked out by the venue at midnight. We only had the dancers for 1 of those nights, the second night was mostly crew with hair gel and black jackets as the extras.
There was another evening shooting the exterior fight scenes and then a day up in the country with the sky dive team.
Then a good solid week and a bit in post.

Q. Do you feel that the client understands the production process?

Yeah these guys did for sure. They'd already produced 4 music videos and had been involved with all of them. (though never starred in one). When pitching I included a rough schedule to show how we'd pull of something so silly in the short amount of time we had. They were apologetic about that aspect too, but it's gotta coincide with radio play.

Would I get more time in pre-production if i did it again? That was the big thing really. Time to flesh out the story, time to produce props and prosthetics, time to pre-light the location. But everyone probably complains about time no matter the budget or schedule. So other than that, 1 million little things or also not much. It was a great fun set and we had a ball. Can't really ask for more than that when you're making big collaborative art projects like music videos.