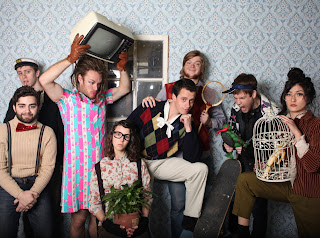 Director Darcy Prendergast (b. circa 1985, the pretty one in the dress) has always had imagination.

After starting his artistic career on the living room walls, his parents supplied his chubby, yet surprisingly dextrous fingers with a wide gamut of art supplies, as well as a steady stream of paper. At the age of 4 he wanted to be a zookeeper and play with Tigers like his dad. At age 5 he wanted to be Indiana Jones, who was a cooler version of Dad. At 6 he wanted to be a paleontologist like Sam Neil in Jurassic Park – who was cooler than Indy because he outsmarted a T-Rex with a flare. Then at the ripe ol’ age of 7, he decided that his constantly shifting career paths were undoubtedly due to a poor understanding of the skill sets that he was endowed with. He opted to allow himself some time for his interests to percolate, manifest and remain… before placing all his eggs in the one basket. With a keen sense for the absurd and a taste for the tactile, he moved into the alluring world of film making at age 17, where he still lives to this day…

Darcy would still like to outsmart a T-rex with a flare.

Video: Rippled by All India Radio

We did All India Radios last music video clip, Lucky. That notched up half a million hits on youtube and snagged a spot on the shortlist for the Guggenheim as well as many other festival screenings and awards. It did really well for them and really well for us, so when we felt like we had improved the technique and had something new to bring to the table, we simply started talking about the possibility of another clip.

Like all music videos I do, it always starts with the music. I have plenty of ideas on the shelf, but I don’t think its wise having pre conceived ideas and trying to force them to mesh. The street party clip we shot for MSD wouldn't suit the song we're shooting for Gotye now, and vice versa. Its a custom fit- you can usually tell a forced concept a mile off. It has to be cohesive and it has to gel. With Rippled, I wanted to align closely with the mood of the track, creating something that sits with the flavour. Stop motion animation will always be my preferred choice and I knew I wanted to revisit the light painting medium- with similar themes only with a narrative this time. I wanted a dystopian landscape, I wanted light creatures emerging into the night and I wanted to play with loose themes of memory and evolution. Lucky was a spontaneous, visceral process, where we simply played with the possibilities. This time round, I knew what we could achieve and play time was over. We planned, we culled, we reshot and we ended up with something we're all incredibly proud of.

No good ever comes from this question. When a band or manager reads the response, they start rubbing their hands together with glee and reducing their budgets across the industry. When a fellow director sees it they either say I could've done better with that budget or you're the reason my budgets are half of what they used to be. I think so many directors and production companies become too concerned with the dollar value. They pocket the majority and forget to make something engaging like they were employed to do. We're one of the few studios that invest the money back into the production- attempting to shoot clips that surpass budget and capture something memorable. The budget quite honestly, was of no concern on this one. It was running on love and I simply wanted to create something that broke new ground and made jaws drop.

We didn't face that many to be honest. The band trusted us after Lucky and basically said take your time, come back when you're happy. Martin Kennedy from All India Radio trickled us money when he could and the crew I continued on in between other clips and other paid work. It was a cruisy production process. We'd grab a few beverages, break into an abandoned warehouse and shoot until the sun come up.

Q. Who were your key collaborators? Have you worked with any of them before?

The Oh Yeah Wow crew- we're a pretty tight bunch. Its more or less a collective of creatives. We all come into the central studio and chip away on various projects. Josh Thomas, Seamus Spilsbury, Michael Greaney, Josh O'Keefe, Donna Yateman, Andrew Onorato, Jayden Dowler, Sam Lewis were the crew on Rippled. We'd share responsibilities- someone would move the camera along our homemade pvc dolly track, others would do the light painting- someone else may do the physical painting. We'd simply give whatever time we could.

The technique involves setting your camera to a long exposure setting and moving a bunch of lights around in physical space. The camera traces you path, and for those wishing to do so, enables you to paint images or words in the sky. That’s the simple response...

Q. What did you use for the light sources?

Canon 5d Mark II, with a variety of Canon Primes.

There is a large deal of trial and error involved. I'm often asked how we line up the images frame after frame or keep track of where characters should be. We've developed simple techniques for measuring our characters in space, but its nothing super technical. There is no secret magical formula we can't share- Its just practice and patience and even then, cheating camera perspective, painting a distinguishable figure/ character/ shape is a hard ask. We delete probably 10% of frames we shoot. When a shot doesn't work in the sequence, we delete it and try again.

Q. Did you have any trouble shooting on locations?

Chased by security once, hid from security a couple of times, paid off security once half way through a magical shot that I knew I definitely didn't want to pack up on. Then one time we saw a naked man crouching by a whole bunch of spray cans in the abandoned warehouse we just bumped all the gear into. He did a slow head turn, reminiscent of something from the exorcist to reveal a mouth covered in silver spray paint. We deliberately didn't tell the rest of the crew still bumping in, so when he'd sporadically walk by to see what were up to... They freaked out a little. That was a fun time.

I guess the only technical trouble we had was with the opening shot- with the critter crawling from the stagnant pond at the beginning and the one at the very end where the light critter jumps back into it. I had to literally wade into this bright green (potentially radioactive) pond at 4am in the morning to get the shot. Knee deep in thick clay mud. More fun times. Things you do in the name of art...

I probably would have sculpted a better creature. Stop motion/ puppet making is kind of our bag, so in hindsight, it probably looks a bit on the amateur side of things. I have plans to continue to explore multi disciplinary film though, so better stuff is no doubt on the horizon.